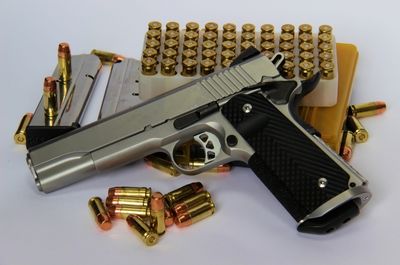 So you’ve finally purchased your first handgun. Well done! You have joined a proud American tradition of self-reliance which may just one day save your life.

Don’t forget to wear your Second Amendment Shirt! Remember, the Second Amendment does not give you the right to bear arms; it simply acknowledges that you have an inalienable birthright to do so.

Unfortunately, you were not born knowing how to use a firearm. The only way to ensure you can effectively handle your handgun during a life-or-death altercation is through practice. If you’re uncertain of which type of ammunition you should select for training and target shooting, don’t fret it! You’re about to learn which kinds of handgun bullets are best suited for practice.

The LRN is the simplest type of bullet, which is made of pure lead and has the traditional “bullet shape” you’re already familiar with.

The LRN’s absence of a jacket means it is relatively soft. Most importantly, this makes the LRN unsuitable for use in semi-automatic firearms; it is nearly exclusively used in revolvers, as their cylinders do not place stress on the bullet while it is feeding into the chamber.

An LRN is inexpensive thanks to its lack of semi-precious copper. A supple lead LRN also poses less chance of deflecting shrapnel back at the firing line if it strikes a hard surface.

Like the LRN, the wadcutter bullet is made of pure lead and is nearly exclusively loaded in revolver cartridges. (Some semi-automatics are modified to reliably feed wadcutter ammunition.)

The wadcutter has a perfectly cylindrical profile – somewhat like a D cell battery. This makes the wadcutter less streamlined, but it also enables the bullet to behave like a hole punch when it hits a sheet of paper. The wadcutter therefore cuts a clean circle through a bullseye, which makes it far easier to assess how closely you’re grouping your shots.

The wadcutter is also practical for self-defense, as its profile enables it to gouge a more injurious wound channel than a round nose profile bullet could have.

The FMJ is the most popular type of bullet for target shooting with semi-automatic firearms, although it is frequently loaded in revolver cartridges as well. It consists of a solid lead core with an outer layer of harder metal that encompasses all but its base.

Most FMJ jackets are made of copper alloy (aka gilding metal). Some FMJ bullets have bi-metal jackets, which are nearly entirely made of steel. It is important to note whether an FMJ bullet has a bi-metal jacket, as many commercial ranges prohibit bullets that can attract a magnet. This is because bi-metal jacketed FMJs pose a higher risk of damaging a range’s backstop and creating sparks that could start a fire.

The TMJ is identical to the FMJ with one important exception: Its jacket completely encompasses its lead core, including its base.

The TMJ’s fully encapsulated lead core is sealed off against hot propellant gasses during ignition. As such the TMJ cannot deposit lead residue on the bore, which in turn conserves a firearm’s accuracy. Furthermore, the TMJ does not produce aerosolized lead during ignition. If you’re training at a poorly ventilated indoor range, the TMJ will spare you from having to inhale vaporized lead.

Frangible bullets are most frequently used for shooting steel targets at close range, as they virtually eliminate the risk of potentially injurious splashback. Because they are made of nontoxic materials, frangible bullets are also popular for indoor range training.

Frangible bullets are also occasionally used for home defense. This is because the frangible bullet poses a lower risk of penetrating walls and jeopardizing innocent bystanders. While safer, it is crucial to bear in mind that a frangible bullet is still capable of passing through a threat in addition to multiple layers of sheetrock!

The JHP is the most popular handgun bullet for self-defense. It features a hollow point nose cavity which fills with pressurized soft tissue during penetration to produce injurious terminal expansion.

The JHP typically isn’t favored for target practice. It is more expensive, and its ability to produce terminal expansion serves no purpose when the JHP only hits an inanimate object. Still, many people do train with JHP bullets, as they want to familiarize themselves with the same ammo they would also rely on for personal protection. You may not wish to exclusively train with JHP ammunition at the range, but it is instructive to try out your self-defense ammo before you would depend on it for personal protection!